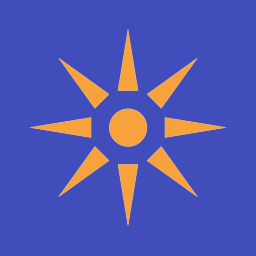 马其顿 is a regional power in the Balkans, controlling much of Macedonia and parts of northern Greece. The ancient homeland of the

Argead dynasty of Alexander the Great, Macedon begins the game under the rule of Kassandros I Antipatrid, son of the

Argead regent Antipatros, having eliminated the remaining Argead claimants to declare himself king some years before. In 450 AUC Macedon is in a difficult position, facing the might of the

弗里吉亚 as it seeks to liberate Greece from Macedonian rule, though the alliance with

色雷斯 and the self-interests of

塞琉古帝国 who do not want to see the

Antigonids grow too powerful offers a path to victory that Macedon may be able to play. Historically, this coalition would prove sufficient to destroy

Antigonid power and lead to the collapse of their entire empire allowing Macedon to restore its hegemony over much of Greece, though infighting within the Antipatrid dynasty would see its downfall not long afterwards and control of Macedon passing between the

Gauls. The kingdom would be restored a few years later under the

Antigonid dynasty, who would rule the kingdom until their overthrow in 168 BC at the hands of the

Romans and the eventual annexation in 146 BC.

If Macedon is destroyed, it can be reformed by decision by any Macedonian-cultured nation (in particular the

伊庇鲁斯 through either the decision or its unique missions if the Epirus Flavor Pack is enabled.

The Wars of the Diadochi

At start, all the Diadochi states will receive an event that gives them claims on all of the western half of the former

阿吉德帝国 and the special Legacy of Alexander wargoal against each other, allowing them to easily declare war and conquer territory from each other. For Macedon, these claims will go away on the death of the first ruler.

Fourth War of the Diadochi

Shortly after the game starts, Macedon will be given an ultimatum by the

弗里吉亚 to surrender Korinthos (418), their last fortress in southern Greece, or face a resumption of war. If the demands are refused and war breaks out, after a few months

色雷斯 may join the fray, forcing the

Antigonids to choose between conceding significant amounts of territory in the Levant - possibly including their capital - or face war against all of the other four Diadochi combined.

A few years into the game, Kassandros and then his heir Philippos IV will fall significantly ill, forcing a succession crisis once the basileus and the primary heir die. Macedon will then have to choose between siding with one of Kassandros's remaining sons - Antipatros II and Alexandros V - with the other starting a

civil war, or try to force reconciliation and face deep instability in the realm. If civil war breaks out, the rebelling claimant will approach another one of the Hellenic powers for assistance, which in the case of asking for aid from

As a Hellenistic culture group monarchy, Macedon has access to the decision to reform the

If it is destroyed, Macedon can be reformed by any country that either has Macedonian primary culture or began as

伊庇鲁斯 (if the Epirus Flavor Pack DLC is not enabled). At the start of the game, the main candidates that fulfill the conditions for forming Macedon by decision are

伊庇鲁斯 (without the DLC) (as the other Diadochi states are considered on the same tier for the purposes of nation formation, though it is theoretically possible for one of them to form Macedon by losing most of their territory and forming

塞浦路斯 first, as it is Tier 1 but has no tier restrictions itself). Macedon may also be reformed by successful revolter countries, as well as the eastern Diadochi satrapies of

阿拉科西亚 if they keep their Macedonian primary culture and make their way all the way back to the west. Note that forming

伊庇鲁斯 as an Epirote-cultured country, as opposed to starting as that tag, will not give access to the decision. 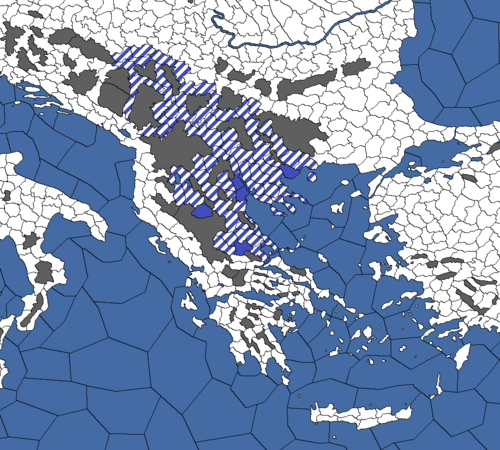 Formation requirements for Macedon by decision. Fully coloured territories are required, while hatched territories will be claimed after formation.

If the Epirus Flavor Pack DLC is enabled, Macedon can instead by formed by a task in the Hellenic Contender unique 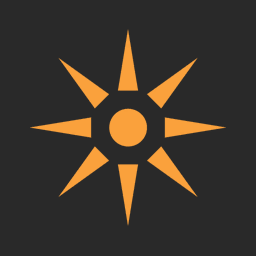 We have succeeded in reclaiming the throne of Alexander the Great in Pella, the heart of the Macedonian kingdom, and vanquished the false successor kingdom of Kassandros. Back under Epirote leadership the greatness of Macedon can finally be realized once again.

Formation requirements for Macedon by the

5 subject states scattered between its neighbours, reflecting its remaining degree of control over Greece and its environs.

In addition, Macedon starts with a

population of 609 spread over its

49 territories, mostly Macedonian Hellenic. The provinces of Thessalia and Aetolia are predominantly Thessalian Hellenic and Aetolian Hellenic, respectively, and there are also small minorities of Taulantian Hellenic pops in the westernmost inland territories and a few Hebrew Jewish pops scattered in some of the larger cities.

Macedon starts without full control of its capital region of Macedonia, making other Macedonian states natural expansion targets. However, directly north of Macedon is a tribal vassal,

派俄尼亚, making it impossible to fabricate claims without first renouncing this vassal. A longer alternative is to improve Paeonia's loyalty until it upgrades its subject relationship to one which Macedon could eventually use to integrate Paeonia.

More crucially, Macedon could easily be drawn into the Wars of the Diadochi, which may not be in its best interests, as any potential expansion will take place outside the capital region, strengthening regional governors rather than the ruler directly.

No More Worlds Left to Conquer